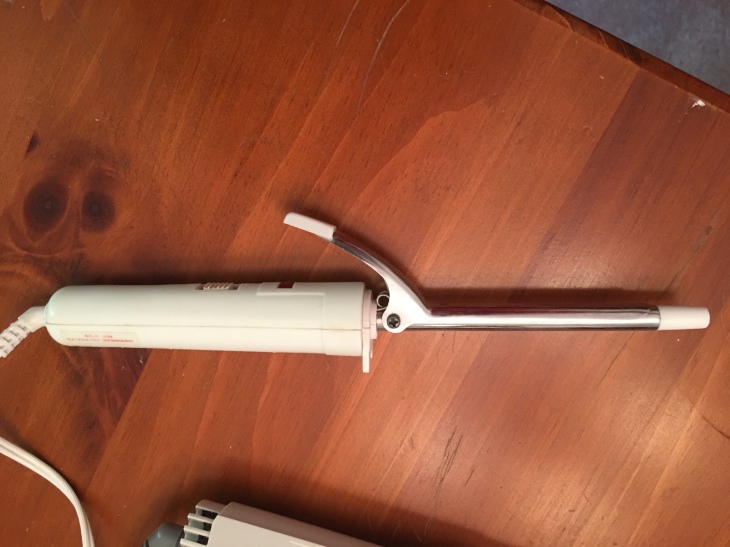 This is a curling iron. It has nothing to do with the sport called curling.  The Purging Lutheran fell into that trap yesterday. Lesson learned. Anywhat, let us get back to the curling iron. Before harnessed electricity was the norm our ancestors used fire-heated rocks to fashion hair into curls. But hot rocks were hard to handle leaving many an ancient goo-goos blistered and scarred. Leaving nature behind, science brought women harsh chemicals to use to dandify their hair. But the misuse or overuse of chemicals often left hair damaged and tangled. Then welcome batteries and your local electric power industry. And what do you get?

The English word bouffant comes from the French bouffante, from the present participle of bouffer: “to puff, puff out” (think Lady Bird Johnson).

So what’s the moral of our story here? My Sweet Rib doesn’t need her curling iron anymore. She donated it as a tax write-off to Goodwi’ll. Good hair! Good day!

I can’t believe your fickleness—how easily you have turned traitor to him who called you by the grace of Christ by embracing a variant message! It is not a minor variation, you know; it is completely other, an alien message, a no-message, a lie about God. Those who are provoking this agitation among you are turning the Message of Christ on its head. Let me be blunt: If one of us—even if an angel from heaven!—were to preach something other than what we preached originally, let him be cursed. I said it once; I’ll say it again: If anyone, regardless of reputation or credentials, preaches something other than what you received originally, let him be cursed.

Do you think I speak this strongly in order to manipulate crowds? Or curry favor with God? Or get popular applause? If my goal was popularity, I wouldn’t bother being Christ’s slave. Know this—I am most emphatic here, friends—this great Message I delivered to you is not mere human optimism. I didn’t receive it through the traditions, and I wasn’t taught it in some school. I got it straight from God, received the Message directly from Jesus Christ.